This week I’d like to discuss the main focus of this website, small companion pet birds. Although such easily found birds as budgies and finches are still considered exotic by many people, the range of small birds species available to us as pets and companions encompasses a dazzling array of personality, color, song, and behavior.

Even though reliable information on their needs and behavior is not always easy to find, many of us have found ourselves enchanted by these small creatures and their winsome ways, many of us so much so that we are commonly heard to say…

Let’s Hear It For The Little Guys!

I have always found the smaller species of birds appealing – from the hummingbirds who persisted in believing that my ear was a flower, to the house finches and swallows who serenaded me as a child from my mother’s clothesline (to my mother’s dismay) – I found them all fascinating and very attractive.

I met my first pet bird as a young boy.. this was an elderly cage-bound budgie, who had lived alone in his cage with rarely any other company than a nearby dog, for 7 or so years.

His human was there to feed him and clean his cage in the mornings and was otherwise never around. He rarely saw anything other than seed and water. As his human owner grew tired of him, the bird was eventually given to me.

Watching the slow blossoming and flowering of his stubborn, social little self was my first education in bird psychology, and cemented an original fascination into a lifelong addiction – I already knew that I had a special bond with many creatures, but it soon became quite clear to me that I had an instinctive understanding of these little-feathered gems and many of their motivations. I knew without a doubt that I wanted to learn more.

I was very surprised to learn how difficult it was to find reliable information on handling, taming, and keeping pet birds happy and healthy. Many pet owners relied on pet stores to instruct them, while the workers in the pet stores were simply told to sell whatever product seemed appropriate to the question being asked – whether it would provide the needed solution or not.

But I persisted, and whenever I found someone who could teach me something, I haunted their vicinity whenever possible and asked all the questions I could think of. That habit served me better than any book and persists to this day. 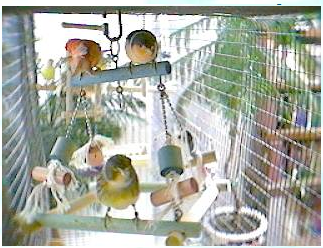 My family, friends, and acquaintances proved over and over to me that my ideas were not common; almost everyone I knew and met seemed to wonder just what I found so interesting about birds – “After all, it’s not like they have feelings!” I was often told, or from the few who admitted that it was possible that birds could have feelings, I would hear “Even if they did, how could you tell? They can’t express much with only feathers and a beak to work with!”

In my life, I have kept and sometimes bred all sorts of birds, both small and large, and the one thing I have never found them lacking in was expression!

From gold-breasted waxbills to hyacinth macaws, all the birds I have met were capable of an incredibly varied range of looks and calls – but still, the tinier the bird, the more fascinating I seem to find them.

Most of these smaller birds seem to consider themselves the equals of any of the larger species – and often the larger birds believe them, too, and will give way when all it would take is one snap to settle the score – and the smaller bird’s life.

But instead of protest, the larger birds will often defer to the smaller bird’s demands – and most love to watch in apparent fascination as these brassy, bossy wee gems go about their daily business.

The therapeutic effect of aquariums on the sick, elderly, or bored larger companion bird has often been spoken of – but rarely do I hear mentioned another true fact, that the same thing can be said of small birds kept within a range of sight of the bored or infirm larger companion bird.

For me the fascination with birds of all kinds, especially the smaller ones, will never end – and if I can sometimes share some of my experience and fascination with others, I will know I have really accomplished something in this life.

Do you like to tell stories about your birds, or have an odd bird-related fact or experience to share? Why not write us a short story about your bird or birds to share with other readers? Simply fill out our Guest Posting Form

She should never have hatched in the first place. I have never been able to imagine how it happened; the fact that it did lends me proof that miracles do too still happen.   It was Read more…

NOT AGAIN!!! Her air sac problem healed just in time for the next emergency. One of my older birds came down with a virus; although the diagnosis was not positive, as I’d caught it quite Read more…

AUTUMN GAMES It took me awhile to catch Turker in the act of releasing herself from her cage to play, and in the meantime, she had free run of the house whenever she felt like Read more…