Formation of the Canary Egg

The egg is a delicate organism, and it is assembled in a precise order. First, the yolk and ovum are produced. They develop in the ovary, a grape like the cluster of ovules or miniature yolks located in the back of the hen. The yolk remains in the ovaries until it is ripe. When it is mature, the yolk drops into the funnel section (infundibulum) of the oviduct. Here the ovum is fertilized by the male sperm cell. As the egg passes to the magnum, a thin layer of albumen (egg white) is placed around the yolk in the form of a thin sack. At either end of the yolk, thin strands of albumen are twisted to form the chalaza. The function of the chalaza cord is to hold the yolk in place as it travels the length of the oviduct and to prevent it from rising and bruising itself on the shell membranes. It was thought the chalaza affected the fertility of the egg; this is not so. Its sole purpose is to hold the yolk in the proper position. Before the yolk leaves the magnum the majority of the albumen is wrapped around the yolk. The egg then enters the isthmus where two shell membranes grow around the yolk and albumen. These membranes are loose fitting at this point. Final egg development occurs in the uterus. Actually, about 80% of the time it takes to form an egg is spent in the uterus. The uterus is often referred to as the shell gland for here the inner shell membrane is made tight, and the outer, harder shell is produced. The egg moves through the vagina to the cloaca and is finally expelled. The whole egg formation process takes a little more than 24 hours. 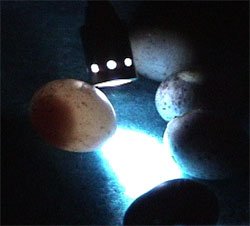 Much time can be wasted by allowing a hen to incubate infertile eggs or eggs where the chick fails to develop. Candling is a way to easily determine if something will develop or not. Get a candling light (here is the one I now use) and examine them. An infertile egg will look like the one on the left.
The egg on the right shows the development of a horizontal blood line near the top, with blood vessels going down from there. Later on the beating heart, and movement will be evident until the contents are too dense to see much detail.

Eggs are fragile and a flexible flashlight will allow examination without removing from the nest. Check about the 5th day, after all, have started incubation. The last egg or two may not show development yet, so preserve them. This is a good time also to see if any need repair. When eggs remain for a couple of days after others hatched, check again to determine if any egg stopped developing or they have damage, or the chick died. Do no prematurely dispose of eggs that do not hatch with the others unless you are sure it is dead or stopped developing. The light helps you do this. 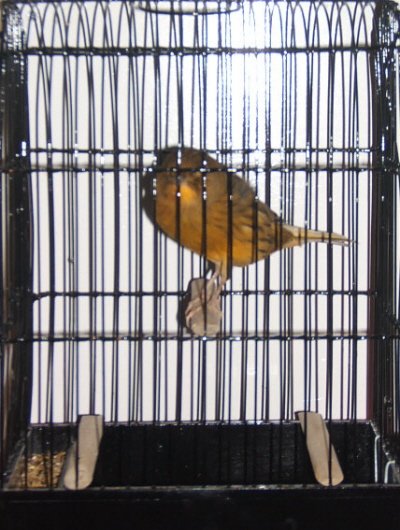 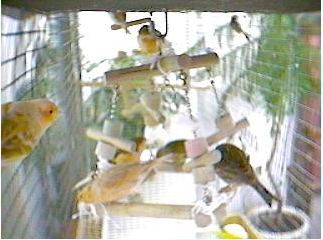 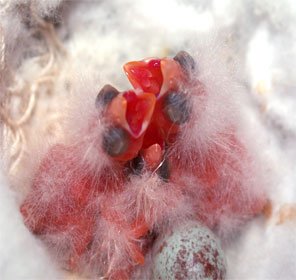 Breeding Canaries In An Aviary